I became a climate refugee after Hurricane Ophelia struck Ireland. Overnight my lifestyle changed to Amish: going to bed when it got dark with bell, book and lantern. And I was lucky because I quickly moved inland up country, ironically, to give a lecture on Climate Change and Air Pollution. 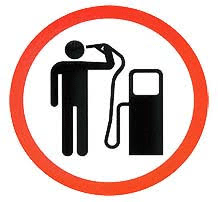 The unwarranted disconnect between Climate Change and Air Pollution in the minds of Ireland’s policymakers was apparent in two environmental events over the first week of November 2017. In the first the Citizen’s Assembly on climate change made an overwhelming recommendation to remove subsidies on peat extraction for climate change reasons (with no reference to health matters). In the second the EPA announced that burning peat was the biggest threat to air quality in Ireland (with no reference to climate change).

Air Pollution and Climate Change are two sides of the same coin. And that coin is made of carbon. We tend to separate the two, some even say there is a tension between them, but they cannot be divided and there is no conflict between them. They arrived inseparable.

Put in purely financial terms, the carbon coin currently buys us most of the energy we use and need. But spending it comes at a price, which includes effects on our health and well-being as well as the weather we experience over the long term, although the short term is our obsession.

October 2017 will be remembered for a long time in Ireland as the month when we could not escape headlines and articles about death by air pollution and extreme weather. “The rage of Ophelia” and “Pollution deadlier than war, disaster and hunger” were two of the most memorable. However, they could not mask the human tragedies like the one about winds, travelling more than 100 mph, bringing down a tree on a car and killing the driver. Or the data published in the journal Lancet, which showed more than 100 million years of human life around the world were lost in 2015 due to airborne fine particulates. The stories appear disconnected but they are not; they are linked by the burning of our carbon coins.

Hurricane Ophelia started life as a non-tropical storm in the first week of October. It picked up energy from the warm waters off the coast of Africa turning into a hurricane five days later. Then it intensified and later weakened in the cooler waters off the south coast of Ireland before hitting land on 16 October. It was an unusual extreme, weather event because no hurricane had formed that far eastwards in the Atlantic before. But can we connect what happened to climate change? To answer that question one other question needs to be answered first: What is a normal weather event?

Rainy days, sunny days and windy days are all a natural consequence of planet Earth’s climate. We are even familiar with storms, heat-waves and gales. These are less normal weather events but we can cope with them relatively well on the occasions they turn up. It is only when our climate leads to floods, droughts and hurricanes that the term extreme weather event becomes appropriate. One of the consequences of global warming is, in chemistry terms, to change the energetics and kinetics of the extreme weather events. In other words they become more intense and their frequency increases. It all happens because of the extra energy pumped into our atmosphere and oceans by our reliance on fossil fuel burning.

The planet could likely cope with the extra energy if it could escape our atmosphere efficiently. Instead, because the carbon dioxide and soot (black and brown carbon) released by the combustion process can trap the heat, the planet’s surface warms up. The result is higher temperatures measured over air, ocean and land. In fact since the 1850-1900 baseline average, the average surface temperature of Earth measured in 2016 has risen by 1.2 C, that is an increase from 13.8 to 15.0 C. But why is this, less than 10 percent rise, so important to our climate change?

The physical behavior of water is the key to understanding how a hurricane develops. Water can be a liquid or vapour or a solid, as ice. Now oceans make up about 70 percent of the Earth’s surface with between 0 and 4 percent of the water existing as vapour. (The exact amount depends on the temperature where the measurement is being made). Higher temperatures release warmer water vapour. Hot air rises and in the process the warmer air sucks more water vapour from the ocean surface into the atmosphere. The greater the ocean temperature the greater the feeding frenzy. The water that evaporates can simply remain as a vapour but, if there are suitable small particles in the atmosphere that the water vapour can condense on, a droplet forms and rain falls. This process also releases energy and for all these reasons the amount of water vapour there is in the atmosphere becomes the driver that powers the intensity of the hurricane.

Normally, the ocean temperatures sufficient to kick-start a storm that can become a more extreme, hurricane event are found in locations like the Caribbean and the Gulf of Mexico. But with the increasing surface temperatures that Earth is now experiencing the ocean water east of those regions is warming up too. The Caribbean is about 7000 km from Cork. Cape Verde (due east of Barbados) is just 3000 km away from Kerry and so with increasingly warming waters that sit a relatively short distance away, we might reasonably expect more crazy Ophelias in the years to come. Watch out trees and power lines.

Who cares as long as you’ve got your health?

Nobody has Air Pollution written as a cause on their death certificate. So headlines like “Startling report reveals that 1500 die in Ireland every year from pollution” on the That’s Farming website in October are misleading. More accurate was the Irish Examiner headline: “1500 die prematurely due to air pollution; new report”. And so was the RTE headline from about the same time, “1600 premature deaths in Ireland caused by air pollution”. Clearly in the two correct headlines there is a discrepancy of 100 deaths but they are both right because both got their information from the European Environment Agency report entitled “2017 Air Quality in Europe Report”. For information, my headline would have read: “1100 to 1660” premature deaths result from air pollutants in Ireland”. I would also be right.

“Premature” is the important word here because what is actually done is to count the reduction in life expectancy that is directly linked to air pollutants like nitrogen dioxide (NO2), ozone (O3) and fine particulate matter (PM2.5). That is not an easy task and the results are based on statistical surveys carried out in many different regions throughout the world. Of course, the accuracy of the results depend upon the quality and extent of the air monitoring done in each region.

The science and statistics that underpin this important part of our life today started in 1993 with the publication of the now famous, Harvard Six City Study. It related the level of PM2.5 to life expectancy in cities like St Louis and Topeka in a study of over 8000 people. The results were startling. Years were taken off the lives of those exposed to 20 microgram/m3 compared to those experiencing 5 microgram/m3.

Since that time much air monitoring has been performed throughout the world and associations between NO2 or O3 with premature death have also been established. Part of the problem in establishing accurate figures is where to set a baseline below which no adverse health effect occurs. We are not sure of this level for nitrogen dioxide and although only a zero threshold for exposure to particulates is deemed safe, our air monitoring technology is not yet that sensitive and our world does not really work without some level of particulates in the air.

That is why those figures for Ireland (and other countries) have such a range. It depends where the baselines are set. But in reality (and we have to ask) is Ireland’s 1100-1660 premature deaths figure that I gathered from the EEA report close to being correct? Only time will tell.

The reason for my doubts is because so little real-time air monitoring is currently carried out by local authorities and the EPA in Ireland. The system lags far behind that set up in most other countries, including Northern Ireland. However the plan announced on November 6 by the EPA should radically transform our capacity to monitor fine particulate matter, ozone and nitrogen dioxide. We will have to see how results from this new network influence future EEA statistics.

January 2002 is an important date for most of the population of the EU. It is the time we changed our national currencies to the Euro. From all of the above connections between our health, well-being and climate change with our spending the carbon coin, is it not time to dump it? And replace it with solar, wind, waste-to-energy and nuclear as our means of exchanging and distributing our energy?

I think you can guess what my answer is.

The element lead has had an important relationship with air pollution from use of the petrol additive called tetraethyl lead as an “anti-knock” agent. That issue has long since gone away but lead in our environment has not as clear from... Continue →