The bad, the ugly and the good of Saharan dust (redux) 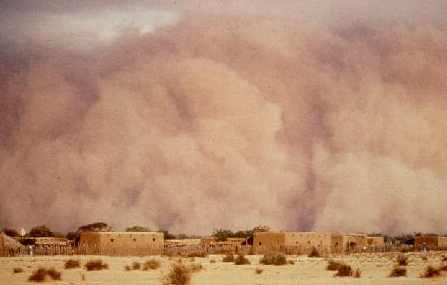 The idea for the CRAC SodeauBlog all came about because of this entry that I wrote for the Newstalk website earlier in the year. So this is how it all began……. and was 2014 a bumper year for Wexford strawberry growers?

The Bad and the Ugly

We all think that two of our fundamental human rights are to be able to breathe clean air and drink clean water. Nobody would argue with that. But achieving those rights for everyone across the planet is becoming increasingly difficult. Issues like climate change and pollution do impact us all and we read about problems associated with them almost every day now. The reason is that the earth’s environment is something like a bean bag: push one part in and some other unpredictable part will push out. Like a living organism we are never precisely sure about what is going to happen next with it. The reasons for this are that processes happening in our air and oceans are complicated. Sometimes humans are to blame; say by relying on coal burning for much of our energy. Sometimes it’s because of nature. For example, I remember several of my friends and family being stranded in Spain because of the Icelandic volcanic eruption. You might know people too who had to sleep at an airport for days on end. On the other hand there is much good to be associated with our atmosphere. The main one is obviously due to us actually being able to live because of the oxygen in air. It’s when everything goes out of balance, mainly when our own activities and the raw power of nature act together that dangerous impacts on us can potentially arise.

The airborne Saharan dust news we have recently heard is actually a good example to show how complicated just one type of event can be. Potentially there were bad, ugly and good aspects associated with it all. To understand those you need to know what Saharan dust consists of and how it gets to float over Ireland. Saharan dust contains Ca, Mg, phosphorous (all natural chemicals in fish), silicates (as in sand/glass) or iron (as rust) and often it’s slightly acidic, which is important because that can help make some of the other ingredients bioavailable or in other words living systems can take the ingredients up and use them in sometimes good, sometimes bad, ways.

Now air is a fluid, very much like water, and just like boats can float on the ocean, pollutants such as ozone and particulate matter can float in the air and be carried by currents. Where the pollution might end up depends upon the direction and speed of the winds. Sometimes the winds take the chemicals to places where the air is very still and not moving around and so the pollutants, exactly like a sailing boat caught in the wrong place at the wrong time, can remain becalmed for days. That’s what happened with the Saharan dust last week. It was taken up into the air by dust storms in Africa, rode the currents to Europe and over the UK hit a region that was becalmed. Some made it over to Ireland but the winds there helped with dispersion. Some of the dust though was rained out and covered cars with fine red dust that is a rust colour because of the iron in it. So there was a bad effect but certainly not the end of the world. On the other hand Saharan dust can exert an ugly effect on our health. It not only consists of particles that we can see but also many that are about 1/1000 of the width of a human hair. These smallest ones can be very dangerous if they dive deep into our lungs. In fact the greatest numbers of particles from Saharan dust are found at the lowest sizes. And so because the burden of these particles added to the relatively normal high levels of pollutants that are produced from day to day in the UK there was a jump in hospital admissions there last week because of patients presenting asthma and cardiac problems.

Every cloud has a Saharan dust lining though and it is possible in Ireland that we will experience an increase in crop yields where the particles dropped to ground. That’s because the dust contains phosphorus and iron, ingredients that can support nutrient growth and act as a natural fertilizer. To test this theory, not fully scientifically of course, local farmers should check the Wexford Strawberry and potato crops in a few months to see if it’s been a bumper year.

The moral is: on rare occasions air pollution can provide benefits….but that’s never the full story. And it’s that story we are trying to understand at the Centre for Research into Atmospheric Chemistry (CRACLab) at University College Cork. Current projects are aimed at measuring both chemical (e.g smoky coal emissions) and biological (e.g pollen and fungal spores) particulates/aerosols on a real-time basis. Most of the traditional techniques employed to monitor particles in the atmosphere (often termed PM2.5/PM10) only provide a “snapshot” of a pollution event at one time. Our methods allow “unusual events” to also be recorded. Pollen particle counts for example in Ireland are derived from measurements made in the UK some days before because the analysis methods used are laborious, require high levels of training and are expensive. In contrast our real-time instrumental approach allows the counting to be done in seconds. It is inevitable, in the future, that most air pollution monitoring will be performed using sensors that can give us back instantaneous results for passing on to the general public.

We’re Walking in the Air

Scientists find it difficult to communicate science to the public. (There are notable exceptions like Attenborough and Bronowski). One part of the problem is the unemotional and rational state required to make authentic discoveries about... Continue →