Will the drop in world milk prices help to save the planet?

On 10th September the Irish Government agreed to take in 4000 refugees many of whom are leaving their homes as a result of the Syrian conflict. This number will be dwarfed by the possible level of environmental refugees predicted to be on the move later in the century because of global warming. That is, 150 million or more! How would Ireland cope with its share of that number? 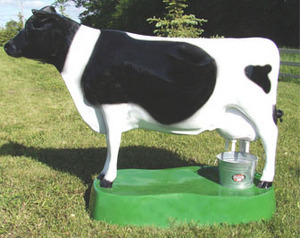 The release of the Green House Gases (GHG), carbon dioxide (CO2), methane (CH4) and nitrous oxide (N2O) into the environment leads to global warming. There is no argument about this fact. The effect for CO2 was predicted as far back as 1896.

The presence of GHG in our atmosphere causes an effect on planet Earth that is just like the one caused by the panes of glass we use to build our garden greenhouses to help grow delicate plants. That is they let the sun’s visible light through to hit the ground or the plants to help them grow but in doing so the incoming energy is degraded to heat…..as you must know whenever you step inside your greenhouse from outdoors. The effect is felt because the glass does not let the heat escape and so the temperature builds up even if there are leaks in the building.

In fact the planet does need a certain level of GHG and water vapour for us to exist at all….but only at a “Goldilocks” amount…that is not too much and not too little. It has to be just right! If we go above those levels we set off an Enhanced Greenhouse Effect that causes a rapid (over a geological time scale) warming that is predicted to have some severe outcomes on all life on the planet.

We are causing the enhanced effect because of the understandable desire of an increasing world population to improve home comforts. This can only be satisfied by increasing our energy requirements. When partnered with our continued dependence on burning fossil fuels like coal and petrol the outcomes by mid-century are predicted by scientists to be catastrophic. We can look forward to droughts in some places, floods in others and extreme weather events if we do not act to avoid a world that has an increase in temperature of about 4 0C in the fairly near future. Connected outcomes will be food shortages, some areas being totally submerged and at least 150 m “environmental refugees” displaced from their homes. In fact some scientists have connected the war refugees from Syria, a previously fertile land, to the 2007-2010 drought experienced there. In other words the civil unrest was driven by hunger and famine, just like in Darfur, Africa a few years ago.

Fossil fuel burning is not the only source of GHGs in our atmosphere. For Ireland a recent report (May 2015) from EPA predicts by 2020 that 45% of Ireland’s GHG emissions will be due to agricultural activities (compared to 40% from traffic and residential burning), a large increase from the 29% emitted in 2009 by agriculture (with 33% from traffic and residential). In Ireland most of the livestock related GHG emissions come from the dairy and beef sector.

The increase in agricultural contributions to our GHG budget is, in part, due to the driving force behind Food Harvest 2020, where the current Teagasc road map on Dairying predicts that by then cow numbers will go up by about one-third from 2009. (Although at the same time it is predicted that the GHG emissions per unit of milk production will fall). But the release of any GHG to our atmosphere will change our climate. It will cause damaging legacy issues to succeeding generations even if it is currently being seen by farmers and the government as an economically attractive option for Ireland plc in 2015.

Of course now has come the worldwide drop in milk prices that has been blamed on events in Russia and China. Indeed anything appears to be the issue except the removal of milk quotas. This is a double-edged sword that acted as a starting gun to increase output from Ireland’s Dairy and Beef sector……just like the rest of the world with its supply and demand economics.

Firstly, I believe that Ireland and its government and its farmers should begin to listen to John Sweeney from NUI Maynooth. He condemns the “shoddy little deal” being constructed in the EU that will allow Irish farmers to be treated as a “special case” regarding GHG reductions here. He is right.

Secondly it is important that scientists like myself speak out and try to help promote an education programme on global warming and climate change to every citizen. But we should start at a very early level with the farmers themselves by improving the Ag Science leaving cert syllabus to include very large sections on environmental impacts and sustainability. They should be informed, for example, that it is not only the livestock that cause the release of GHG but nitrogenous fertilizer degradation too.

It also needs news outlets like Agriland and Farmers’ Journal to publish regular columns on what the effects of climate change on the grandchildren of our current generation are likely to be. And how agriculture can help us to save the planet.

That’s what should happen next.