Cleaning up our Act (redux)

After a long wait it appears that a Clean Air Strategy for Ireland will be published. Submissions close today. Here is mine 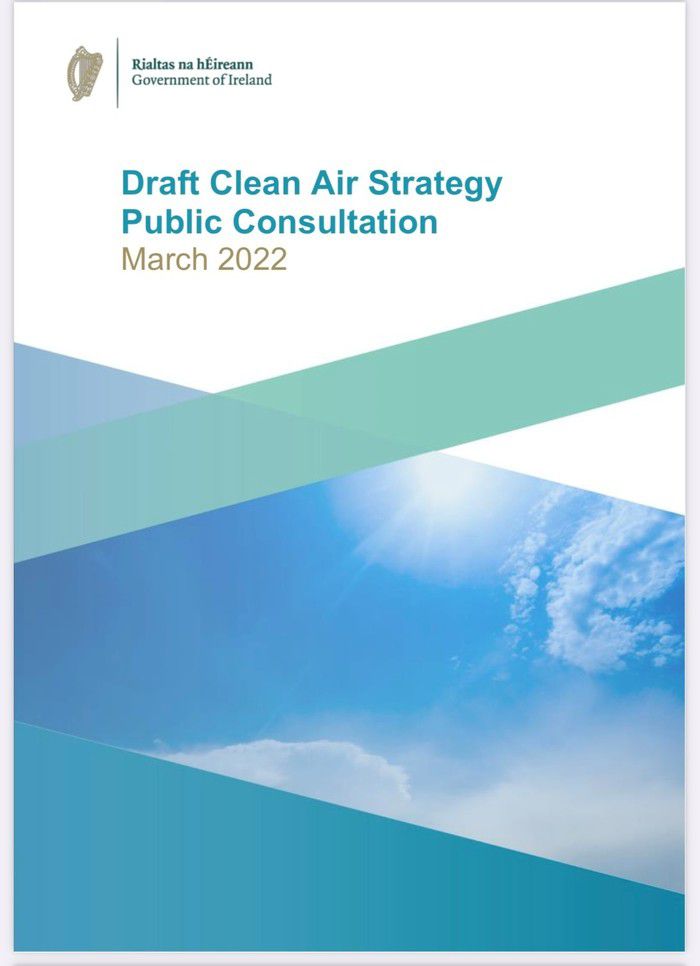 Today
The current Air Pollution Act is not sufficiently robust to respond effectively to the progress made since 1987 in monitoring air quality and understanding the impact air pollution has on our health and Earth’s climate.

The main function of the 1987 Act is to provide a national Framework to allow compliance with EU Directives on matters such as limit values for a variety of airborne gases, vapours and particles.

The Act does not put the health and well-being of citizens as it’s raison d’etre. And therefore, in my opinion, it should be scrapped in its current form and be replaced by legislation providing the public with exactly that.

There are a number of aspects of the current legislation that were inappropriate from conception and are also now outdated due to scientific/ medical progress.

Tomorrow
I would propose the introduction of a Clean Air Act for Ireland. The title alone would provide a positive aspiration as opposed to the negative message given by the words “Air Pollution”.

Putting the health and well-being of us all front and centre in the new Act would allow a number of positive innovations.

Firstly, the new WHO Limits and recommendations on air pollutant concentrations should become the benchmark for the EPA to police alongside Local Councils.

Do not stop at the benchmark though. The overall ambition should be to make continuous improvements to all aspects of monitoring, modelling and eliminating air pollutants.

Particular attention should, of course, be paid to the three key chemical “issues” outlined in the public consultation document. But one important air pollutant that is important to our health and now increasingly understood to be of great climate consequence is missing. Ozone.

I see no reason why it should be omitted from your document. The EEA premature death statistics do give it proper mention (along with PM and NOx). Furthermore, it’s increasing presence in the troposphere warms the planet and impacts our oceans.

Ammonia processing in the atmosphere is relatively well understood. But the heart of the matter is not only for Ireland’s farmers to improve husbandry but also to eliminate the use of nitrogenous fertilisers.

They lead to the triple-N whammy of ammonia particulates from the processing of released nitrates. Nitrates/NOx not only react with the ammonia to make secondary particles but also can produce tropospheric ozone and nitrous oxide, which is a potent greenhouse gas and stratospheric ozone depleter.

To do all this would require an expansion of the EPA to further increase its monitoring, modelling, research, communication and educational activities.

Although great progress in monitoring real-time air pollution data has been made in Ireland since 2017, the AAMP needs to be much more ambitious. The network will have to extend over many more locations. It will require the setting up of one or two super-sites where ultra fine particles can be monitored alongside the full suite of air pollutants.

It will need to initiate and support hyperlocal measurements made by individuals and interested communities. Those are the measurements that will drive air quality policymaking in the future. And also the instigation of air pollution forecasts.

It must link in much better with the media and public by providing real-time information as well as measurement. And not just newspapers and radio; display results at bus shelters, for example.

Secondly, the function of the Local Councils in enforcing regulations associated with, in particular, solid fuel burning must be clarified and more importantly be made sensible. They should also be allowed to set up both Clean Air and Low Emission Zones where they feel necessary because of road transport problems.

Encouragement of pedestrian zones would help alleviate hot-spot pollution. As would the development of local clean air strategies in all villages, towns and cities.

Currently the national activities resulting from the Air Pollution Act come strictly under the remit of the Department of the Environment. The Department of Health takes no responsibility. That should change.

We know much more now about the influence of air pollution on premature death and hospitalisations from conditions such as stroke, heart failure, cancer, asthma, diabetes, miscarriage, dementia etc. Hence active support and input from the Department of Health is a modern necessity to ensure that a Clean Air Act will work.

It should operate in tandem with the Department of the Environment to clarify/inform the public on issues such as the lethal effects that solid fuel burning have on family and neighbours, especially the most vulnerable in society. After all The Department of Health does have experience in changing public perceptions on the outcomes of smoking tobacco both as a primary poison and as second-hand smoke.

Although the tabled Clean Air strategy document is well-researched and outlines many of the challenges to be faced in keeping our air clean it appears to provide little guidance or initiative in addressing the really tough problems.

One is to strictly control some agricultural practices with legislation and enforcement. The party is over regarding national herd sizes, chemical fertilisers/pesticide use and also commercial turf mining. The time for road-maps is over. Reduce, prohibit and replace actions will speak louder than words.

The second is in educating the public and politicians about the health dangers associated with burning wood, coal and peat/turf. Currently it is like hitting your head against a brick wall to convince: I know from experience. Initiatives like the car-idling outside schools Bill should be supported; not ignored. How many people know that dry wood releases about as much toxic PM2.5 particles as smoky coal? Yet the DECC mantra is directed only toward the evils of wet wood!

The third is to promote the linkage between Northern Ireland and Ireland on all matters pertaining to air quality. The AAMP and Northern Ireland Air measurements should be combined into a common database. The trafficking of coal over the border should be stopped by agreement in this new cooperative environment.

The final challenge is one I alluded to above. The DECC and Department of Health must take joint responsibility for air pollution matters especially with regard to the financing of the EPA. Both inputs are required.

The outbreak of COVID throughout the world demonstrates that it is no longer sufficient for the EPA to focus on outdoor air pollution. It must pay more attention (beyond Radon measurements) to indoor spaces both domestic and workplace. It should follow the lead of the US EPA and instigate a “Clean Air in Buildings Challenge”. The aim is to help building owners to both improve Indoor Air Quality and to protect Public Health.

Currently the EU have no quantitative limits for chemical and biological pollutants in offices, schools, public transport, hospitals and homes. Ireland should contribute to any EC initiatives and Directives in this regard. It will require the EPA to support the monitoring of indoor pollutant in many locations, at many levels and relating the measurements to health outcomes.

To achieve this goal means that they should bring together teams of air scientists, biologists, epidemiologists, health experts and building/ventilation engineers to devise strategies to be ready for the next round of EC funding on indoor air quality. There was a woeful lack of Irish participation in the last round because such interrelationships do not thrive in the research funding regime that the EPA currently operates under.

Reliable, legislative recommendations will require a much deeper understanding of indoor air quality regards the behaviour of biological aerosols such as spores, bacteria and viruses. In particular, the potentially synergic effects that result from the interactions between chemical pollutants with biologicals in aerosol form must be studied. Currently little is known.

The day after tomorrow

The ambitions of my Clean Air Strategy for Ireland over the next 10 years as described above are underpinned by the introduction of a Clean Air Act. Once that is in place new and expanded functions for the EPA must be assigned.

The EPA came into life as a result of the 1987 Air Pollution Act. I believe the new Act should bring an EPREA into existence, where R stands for Research and E means Education.

This body should not only perform its current normal duties of monitoring and licensing etc but also be charged with setting up Centres of Excellence. Air should be one. (Land and Water might be two others).

Talent should be cherry-picked to populate the Centres and sufficient finance should be made available to perform internationally competitive research on transport, fuel alternatives and agricultural emissions. There is also a crucial need for them to better educate the public, politicians and the media about the influence of good air quality on our health and climate.

The End
Current understanding of air quality and why it matters is poor over the connective triangle between public, politicians and the media. The recent debate on the mining and burning of peat provides a good example of the problems to be faced if Ireland’s Air is to become cleaner and can reach the new WHO limiting values. There must be a clear movement away from the One Man and his Bog mentality to Mother Nature knows Best.

We must recognise the crucial link between outdoor and indoor air quality and the new EPA should not partition them.

There can be no better approach to improving our health and planet Earth’s health than by the DECC performing this Clean Air scoping exercise.

But let the words turn into reality quickly.