Getting pollen off my chest 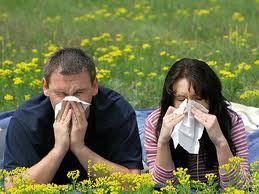 I get hay fever. Not as bad as some do, but irritating enough. Is that the reason I have turned most of my research activities towards the detection of airborne pollen and spores?

You may be surprised to learn that the daily pollen count you read in the newspapers or on the MetEireann website comes from collections made near Worcester (and elsewhere) in England.

In the small print under the table you will read the copyright protection words: © National Pollen and Aerobiology Research Unit. In fact this is a world famous research group that supplies the UK MetOffice with the counts for them to put into wind dispersion computer models in order to make predictions like LOW, HIGH, VERY HIGH as blanket descriptions for very large regions of both countries.

What you also may not know is the way in which the pollen are counted at present…..

The reason why Ireland no longer makes its own pollen (and spore) counts is because the work is very labour intensive and therefore very expensive. Furthermore It takes a long while to train people to count and discriminate between the different pollen types (grass, weed, tree etc) using optical microscopy. In fact that analysis is the end process with the current method employed, which works like this. First the airborne particles (pollen, spores, chemical dust, vegetative debris) are collected on a motorized whirling-arm device that has some slowly moving, sticky-back tape placed in the sampling area. This impactor is then left to run over about a week before an operative collects and replaces the tape, takes it to the lab, cuts the strip into sections and then puts them under a microscope for the counting of certain (not all) sections. Surprised? I certainly was when I first heard of this approach about 7 years ago. Stone-age was the actual phrase that came to mind as did an analogy between old style photography and video.

To understand how the counting of pollen is developing in 2014 and how it’s different from the method described above, imagine taking two photos using a traditional camera with film in it that needs to be sent off for developing and return (yes that happened in the 1990s). Photo 1 is of a radio broadcaster sitting at his desk at the start of a three-hour programme. Photo 2 is of the same person about two hours into it all. You wait several days to see the results and when you do, the two photographs look almost identical maybe with a change or two. On the other hand if you had taken a video of the programme you would see it happening in real-time and, likely at some stage, the broadcaster getting up and having a break. The two-photo approach would take you several days to learn that apparently little had happened. So much time-dependent detail would have been lost using the camera!

The methods that are now being used to measure pollen, spores and bacteria in real-time are currently in a field-testing phase. For example Dr David O’Connor from the UCC CRACLab is sampling this July, in a campaign partly sponsored by the Irish EPA, with a real-time instrument called WIBS, at a site in Paris alongside many research groups from around the world. The aim is to validate the new spectroscopic methods against the old microscopy ways. (For those who want to read about the exact scientific approach we use at CRACLab then see the following paper recently published in Aerosol Science and Technology published by Taylor and Francis).

So that’s where we are. Does the fact that Ireland is not currently monitoring its own pollen and spores (collectively termed Primary Biological Aerosol Particles or PBAP) matter in the greater scheme of Life on Earth? Perhaps not for me at least. I do not need to read a web-page to inform me of when the pollen count is high, even very high because I get an allergic reaction like itchy eyes or sneezing. But I am not a fully at-risk individual; many others are, especially those with asthma or COPD (Chronic Obstructive Pulmonary Disease). If only we could give them real-time, early warnings on a localized rather than regional basis…..

One postscript: What has Ireland got in common with Moldova, Cyprus, Serbia, Montenegro and Bosnia-Herzegovina? It is not a World Cup related question.

Well these are the only countries in Europe that cannot be part of the European Aeroallergen Network (EAN) Pollen Database. This grouping is used to gather information from more than 600 pollen counting stations over most of Europe. Their data are used by scientists to create statistics and calculate trends of pollen distributions including that for the highly allergenic type called Ragweed (Ambrosia artemisiifolia). This over-sexed “hay fever machine” (one plant can produce over 1 billion pollen grains in a season) is sweeping across Europe due to climate change: it’s not likely to be in Ireland yet but we do not monitor any pollen at all and cannot even use the EAN data-base for predictive purposes….. because we do not contribute to it.

I’ve just come back from Sunny California and in the last three weeks I’ve heard Donald Trump time and again calling for much more oil drilling in the USA because he says climate change does not exist. Then one of my research students... Continue →